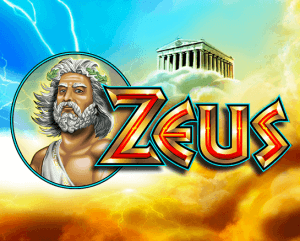 Zeus, the king of gods in Greek mythology, was born to the gods Cronus and Rhea. Because Cronus had been told by Gaia and Uranus that he would be overthrown by one of his heirs, he had swallowed all of his previous children including Poseidon, Hades, Hera, Demeter, and Hestia, as soon as they were born. Zeus avoided being swallowed because Rhea tricked Cronus by giving him a rock wrapped in a blanket instead of the newly born Zeus. Zeus then went on to free all of his siblings, overthrow Cronus and become king of the gods. It is in this powerful position that we find Zeus in this WMS slots game.

The reel of Zeus are set against the bright blue skies above Mount Olympus, where a golden pantheon can be seen. To the right and left of the pantheon are pillars with thunderbolts, symbolising the power’s Zeus was given by the Cyclops after he was freed from the dungeon where Cronus was keeping him.

Zeus is written in bold red letters with gold trimming, with the same gold trimming also wrapping around the reels. The art style is more focused on a cartoon element than realism, but the artwork is clean, colourful and eye catching. Under the reel, sitting on a gold plaque, players will see feature pays, lines, bet per line, total bet and win.

The reel symbols follow along the same mythological theme as the rest of the game. Unlike most games, Zeus does not have an Ace, King, Queen, Jack or Ten. Instead, William’s Interactive have decided to substitute those symbols with something more fitting for the setting.

The following symbols are listed from the lowest value to the highest value. The first reel symbol is a green Greek wreath. The second symbol is a silver coin with an owl embossed on it. The third reel symbol is a golden coin with the head of an emperor. The fourth is an orange and brown Greek vase artefact featuring men running. The next symbols are a copper harp and a silver legionnaire’s helmet with white and blue plume. There’s also a large rowing boat with red and white sales, the mythological horse Pegasus, and then finally Zeus himself. Zeus is the most valuable symbol.

Special symbols are the Wild pantheon and Zeus’s hand holding a lightning bolt, which acts as the Scatter. The Wild fulfils its usual function by standing in for all other symbols except for the Scatter to complete a winning combination.